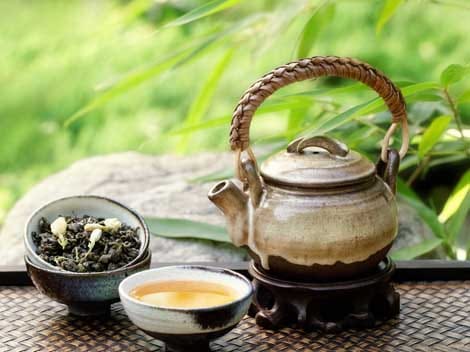 FROM THE WEBMD ARCHIVES

Regarded for thousands of years in the East as a key to good health, happiness, and wisdom, tea has caught the attention of researchers in the West, who are discovering the many health benefits of different types of teas.Studies have found that some teas may help with cancer, heart disease, and diabetes; encourage weight loss; lower cholesterol; and bring about mental alertness. Tea also appears to have antimicrobial qualities.

“There doesn’t seem to be a downside to tea,” says American Dietetic Association spokeswoman Katherine Tallmadge, MA, RD, LD. “I think it’s a great alternative to coffee drinking. First, tea has less caffeine. It’s pretty well established that the compounds in tea – their flavonoids – are good for the heart and may reduce cancer.”

Although a lot of questions remain about how long tea needs to be steeped for the most benefit, and how much you need to drink, nutritionists agree any tea is good tea. Still, they prefer brewed teas over bottled to avoid the extra calories and sweeteners.

Here’s a primer to get you started.

Tea is a name given to a lot of brews, but purists consider only green tea, black tea, white tea, oolong tea, and pu-erh tea the real thing. They are all derived from the Camellia sinensis plant, a shrub native to China and India, and contain unique antioxidants called flavonoids. The most potent of these, known as ECGC, may help against free radicals that can contribute to cancer, heart disease, and clogged arteries.

All these teas also have caffeine and theanine, which affect the brain and seem to heighten mental alertness.

The more processed the tea leaves, usually the less polyphenol content. Polyphenols include flavonoids. Oolong and black teas are oxidized or fermented, so they have lower concentrations of polyphenols than green tea; but their antioxidizing power is still high.

Here’s what some studies have found about the potential health benefits of tea:

Made from herbs, fruits, seeds, or roots steeped in hot water, herbal teas have lower concentrations of antioxidants than green, white, black, and oolong teas. Their chemical compositions vary widely depending on the plant used.

Limited research has been done on the health benefits of herbal teas, but claims that they help to shed pounds, stave off colds, and bring on restful sleep are largely unsupported.

Here are some findings:

Instant tea may contain very little amounts of actual tea and plenty of sugars or artificial sweeteners. For health’s sake, check out the ingredients on the label.

Can Tea Be Bad for Your Health?

Most teas are benign, but the FDA has issued warnings about so-called dieter’s teas that contain senna, aloe, buckthorn, and other plant-derived laxatives.

The agency also warns consumers to be wary of herb-containing supplements that claim to kill pain and fight cancer. None of the claims is backed by science and some of the herbs have led to bowel problems, liver and kidney damage, and even death.

The FDA cautions against taking supplements that include:

These cautions aside, nutritionists say to drink up and enjoy the health benefits of tea.

“You want to incorporate healthy beverages in your diet on a more regular basis to benefit from these health-promoting properties,” says Diane L. McKay, PhD, a Tufts University scientist who studies antioxidants. “It’s not just about the foods; it’s about what you drink, as well, that can contribute to your health.”